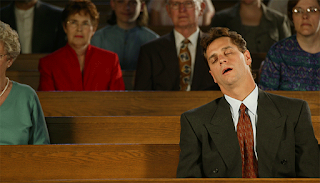 Churches are full of members that believe that if they simply show up they are fulfilling the Great Commission. Certainly this is a false notion which has terrible consequences. The decay of American culture is proof of that. These folks believe that if they are attending church regularly and not overtly violating any of the Ten Commandments they are in step with God’s will. The fact is that showing up to church and living a moral life is not Christianity, at least it is not the Christianity of the Holy Scriptures. It is, however, a truncated, perverse and pietistic view of Christianity which has nothing to do with the Gospel commandment whatsoever. Everyone that holds to this false view of Biblical Christianity puts on an ethical façade. They have that part nailed down. Go to church, sit in pew, stay awake, look interested,  give an occasional nod at the preacher and all is well. Few ever move beyond that mechanical practice. Then there are the others. These also go to church, live moral lives but they go another step further. These even volunteer from time to time for a certain ministry or task. Usually it is because they have been shamed into it or hounded by the preacher. Yet, these too are acting out a façade.

Christ calls the saint to move beyond the façade of simply attending church and volunteering once in a while. He has called His people to advance His Kingdom by taking leadership initiative.

He has called the saints to be self starters, ground breakers, trail blazers. He has given His grace so they can initiate Dominion Action. Anybody can stand around and wait to be told what to do. Leadership is not only knowing what to do, and how to do it, but it is actually doing it. Leadership is showing what to do by example. Getting things done is what counts. Talking about what needs to be done is not . It never was.

The saints must escalate the gospel program of Christian Reconstruction. They must set agendas and re-set agendas when those agendas become sluggish. God’s people are called to be both part of the team as well as leaders in the team. That is how the Kingdom advances. That is what needs to be done.