Biblical Reconstruction and Reform: The Answer for our World

The stability of the national and global community is rapidly unraveling. America is now involved in three military campaigns abroad (Iraq, Afghanistan, and Libya), a violent conflict on the U.S. southern border, unrest concerning Union bullying, Muslim pressure to adopt Islamic social justice, imminent economic collapse, willful destruction of our food supply through genetic engineering , urban gang and drug related violence, the breakdown of the family through divorce and the promotion of the homosexual agenda, human genocide via legalized abortion murders, and a President that hasn’t a clue as how, or which way, to lead the nation. We also see Japan experiencing one of the most horrific disasters of her history on par with the bombing of Hiroshima and Nagasaki of WWII. The Middle East is also experiencing a political and social meltdown, and the future of affordable energy for the entire world is in peril. These are just a few of the problems we face as a nation and as a race.

We are witnessing a total breakdown of the societal order of the City of Man. Like Rome in 410 A.D. the City of Man is being sacked by bands of brutal and godless barbarians. But the barbarians of our age have adopted a particular set of warfare tactics. These barbarians wage what via actual, political, philosophical and ideological means. Unlike the Roman breakdown, we are experiencing a worldwide crisis which will affect every single human being on the face of the planet. This has never happened on this scale before. 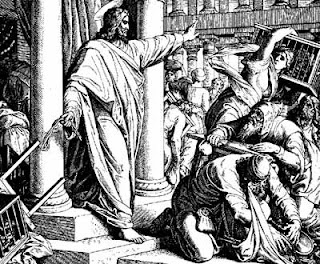 Unlike the thieving bailout policies of the Fabian socialists, Marxists, and American liberals, there will not be any bailout from Heaven. On the contrary, these difficult events are orchestrated by God for the chastisements of the world and her wicked rebellion against His Holy authority.  God has removed His blessings from a rebellious world and the nations have been plunged into chaos as a result.

The prophet Amos explains that every event which comes to pass is orchestrated according to the will of God in a Holy response to the actions of man[1]. For every obedience and rebellion, there is a perfectly suited and just response. This principle is true for both individuals and nations alike.

These events are not the signs of the end. The rapture is not at hand; neither will these events reveal the anti-Christ. Rather these events only testify to the extent of the world’s anti Christian hatred and arrogant neglect toward the True and Living God. God is now calling all flesh to attention by these crises. Whenever a people (or a nation) refuse to acknowledge the comprehensive and universal Crown Rights of Christ’s Legitimate Lordship, God brings destruction – and destruction comes in many forms. God’s judgment is a justified recompense for the rebellion of mankind, and it is God Who determines the manner of chastisement.
There is however another important point to be made. These events are also meant to identify to the professing Christian church, and the professing Christian nation, the United States, their gross irresponsibility to call its civil leaders back into conformity to the Word of God. Blame cannot be placed at the foot of Congress, the White House or the Judiciary without adding culpability to the church and the citizenry for abandoning the God of Abraham, Isaac, and Jacob and His revealed Law-Word.
A RETURN TO GOD’S LAW
It must be evident by now that humanistic policies of men and the godless laws of nations cannot repair the breaches of our global breakdown. Nothing of man’s inventions, politics or policies can help the world now. They have all been exposed as failure. The only alternative is the law of God, understood and applied faithfully and equitably.

1.       In order to be equipped with the Law-Word of God one must first know and understand it. Therefore study God’s word with a view to understand how it ought to be applied to modern difficulties.
2.       Read and study select books which address the logistics and tactics that the Christian must take to redeem the culture.  The Blue Print Series is one I recommend.  Follow our New Geneva Christian Leadership Facebook Page to learn more – subscribe to our blogs and twitter posts.
3.       Study historical books which detail how God’s people dealt with cultural difficulties and how they reformed the culture and overcame the incredible odds against them. Read D’Aubigne’s History of the Reformation in the time of Calvin, Schaffs Historical account of the Reformation particularly the section on Geneva, Pierre Viret’s[2] work and De Regne Christos by Martin Bucer. These will assist you in gaining insight on how to address these problems by use of God’s Law.
4.       Once you are prepared you can begin teaching others and declaring to the rulers of the world what God requires of them. Whether they will hear or whether they will forbear, it matters little, God will use us in either case for His Glory.
[1] Amos 3:6 Shall a trumpet be blown in the city, and the people not be afraid? shall there be evil (lit. calamity) in a city, and the LORD hath not done it?
[2] More on Pierre Viret soon to come.
By Rev. Dr. Paul Michael Raymond|2011-03-25T01:11:00+00:00March 25th, 2011|Uncategorized|0 Comments