Economic Chaos, Fear and Uncertainty: An Opportunity for Christian Reconstruction

THE WARNING: ­
“Paper money has had the effect, in your state, that it will ever have, to ruin commerce, oppress the honest, and open the door to every species of fraud and injustice.” —GEORGE WASHINGTON, in letter to J. Bowen, Rhode Island, Jan. 9, 1787
THE SITUATION:
On February 22nd, President’s Day, World Net Daily released an email stating the following:

“After almost a century of inflation, today’s dollar has less than 2 cents of the purchasing power that it had in 1913 when the Federal Reserve Board was founded.
The dollar in 1913 was backed by gold, as the Founders, including Washington, specified, in keeping with the Good Book’s standard for money.


But that effectively changed in 1933 when President Franklin D. Roosevelt made ownership of gold bullion illegal in the U.S., and in 1971 when President Richard Nixon severed the last anchor of dollar convertibility into gold for foreign banks.

No longer constrained from printing all the easy money they wanted after 1971, the politicians started putting “In God We Trust” on paper dollars at about the same time they removed our currency’s golden handcuffs that prohibited inflating the dollar. Now the world is rapidly losing faith in our anchorless “faith-based,” debased currency, and with good reason.

In the past two years our politicians have conjured $4 Trillion out of thin air. Fed Chair Ben Bernanke’s Quantitative Easing 2 (QE2) is adding another $600 Billion—double the total number of physical paper dollars now circulating in the United States. The Congressional Budget Office days ago projected that 2011 will enlarge the deficit by another $1.48 Trillion. 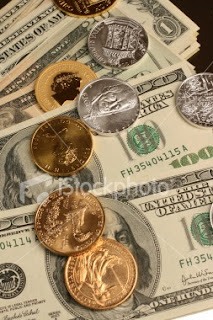 And every one of these new paper fiat dollars steals value from the dollars you earn and save. Food cost inflation is already skyrocketing overseas, causing the riots that toppled a government in Tunisia and setting in motion falling dominos in Egypt and the Persian Gulf oil sheikdoms. Food prices will soon soar here, too.

Our politicians printing trillions of dollars is a major factor in global inflation and instability. Because economic strength and military might were the two legs on which America once stood tall, the fast-approaching crash of the dollar will end our prosperity at home and create a power vacuum that fanatics can fill in other countries such as nuclear-armed Pakistan.”

Since 1980 I have been interested in both the American and global financial markets. Initially it was only out of pure curiosity since I hadn’t any money to invest, being just two years out of college and looking to establish a career. At that time the country was in a recession, there was a high level of unemployment, the dollar was devalued, the inflation rate was rising, and gold was being sold above $850 per ounce. There was also much talk about a two-tier currency, which we now have today—another sign of rapid inflation. Forty years later we are not any better off. The fact is, we are much worse off.

America’s paper money is worthless in itself. It is backed only by the government’s promise to honor it, that is, until it can no longer keep that promise. It is also only beneficial as a medium of exchange as long as citizens are willing to take it as valued currency. Once the people decide that the paper is worthless, the dollar becomes extinct—almost overnight.

Since the U.S. is no longer on a bi-metallic standard of gold and silver, the paper dollar’s days are numbered—and those numbers are dwindling.

Taking into account the current inflation rate, today’s gold price of $1300+ is equivalent to the 1980 price of gold of approximately $400 per ounce. If gold follows the same pattern as it did in the 1980s, today’s gold should double at its peak to $3000 to $5000 per ounce. When that happens, (and I do not say if, but at this present rate I believe I must say when), the value of the dollar will have, for all intents and purposes, collapsed. We may then see the introduction of a North American currency, the Bancor (or whatever name they finally decide to call it. It makes no difference since it is all the same scam).

The Bancor currency, like the Euro, may be the government’s silver bullet to quell the panic that will erupt when the dollar finally fails. But here is the rub: the Bancor is not the people’s silver bullet—rather it is the  government’s. This North American currency will most likely be valued higher than the devalued dollar, making it necessary to purchase Bancor notes with more dollars than a one to one ratio. At the end of the day, not only is the paper American currency devalued by inflation, but it is then further devalued by the unbalanced ratio causing a downward spiraling effect for many families into poverty.

The economic collapse of the American economic system might be the most dramatic and single most important event in the modern history of this nation.

When this all transpires, it will not be the end of the world. It will be the end of an era, but not the world. Jesus is not coming back with His bankbook to bail us out. These events are providentially orchestrated for both our chastisement and our learning. They are also brought about for our opportunity. This is an opportunity to lead with concrete Biblical solutions for our decrepit economic and political system. It is the time when the Sons of God will be manifested.

First: God’s people must be prepared for whatever might come to pass. Families must prepare for what may happen. They must be educated and knowledgeable as to how to insulate themselves in these troubled times.

Second: Churches must realize that they will be called to minister to the community when tough times arise. They too need to be prepared for the role of leadership and mercy to the community lest they create another vacuum for the government to take control.

Thirdly: Our civil magistrates must be made aware of the situation. They must be called to fiscal responsibility, which is based upon Biblical Ethics. God’s people must lead the way.

Last year I prepared six economic reports in order to train God’s people in tactics and logistics. The information is comprehensive and useful. It will walk you through a process so you can plan for any economic downturn. I did not, however, give the reports freely. I required a fee. That in itself was part of the training. You must offer your knowledge and skill for payment. Others will do likewise. This is the first step in entrepreneurship and financial stability.

I am offering these reports again. If you are interested, you can email me at pastor@hisglory.us and I will tell you how to obtain these six reports of 10 pages each, filled with practical advice, links and Biblical principles that will change the way you think about money and stewardship.
The six reports will be given to all interested parties for a donation of $14.95, the price of three cappuccinos. The proceeds will go to our Non- Profit Organization, The Institute for Theonomic Reformation, in support of The New Geneva Christian Leadership Academy.

The economic system of the United States, in confederacy with the global market place, cannot sustain itself in rebellion against Biblical principles forever. There must be a breaking point. There must be a time when God says, “Enough!” (cf. Proverbs 1:24-32)

And yet, God has promised that He will not do anything unless He first declares it to His people. We have been warned. Let’s think seriously about what we must do.

“Surely the Lord GOD will do nothing, but he revealeth his secret unto his servants the prophets.” Amos 3:7