Politics, Tyrants and the Christian Statesman

In his superb analysis of democracy, Hans-Hermann Hoppe, Professor Emeritus of Economics at the University of Nevada, Las Vegas and Distinguished Fellow at the Mises Institute observes that “prime ministers and presidents are selected for their proven efficiency as morally uninhibited demagogues. Thus, democracy virtually assures that only bad and dangerous men will ever rise to the top of government.” Those who thirst for political office appear to be eager to break the moral code that most of us are willing to follow. It seems that the greater the power of the political office that a candidate is seeking, the more likely it is that that individual has no sense of right and wrong. 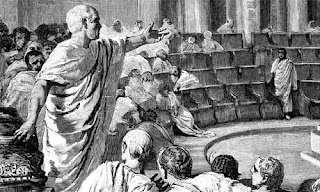 This is especially true in our day where either good or God- fearing men refuse to jump headlong into the cesspool of politics, fearing they too will be corrupted, or they adopt a dualistic approach and claim that government is outside of God’s interest, exonerating them of any cultural and political responsibility.

What is missed behind such an anomaly is the overall reason for America’s political demise. In other words, why is this happening?

“When God begins to judge a nation for its revolt against Him, He removes effective leaders and replaces them with irresponsible and reckless ones who have no appreciation of the past and no commitment to the future under God…[However] when God begins to lift that judgment and begins to receive and rebuild a nation in the midst of repentance, He restores Christian leadership at all levels of church and state in answer to the earnest prayers of His faithful people.”

This nation has been plunged into the abyss of immorality and tyranny as a result of the church’s and the nation’s failure to be culturally relevant God-ward.

“When men with Godly abilities refuse to take upon themselves the yoke of political authority for the benefit of their friends family and fellow patriots, then ungodly, misdirected, reckless, unproductive, and oppressive leaders will rush to the fountains of power.”

Men of God need to confederate together to take back what has been given them by Divine appointment, i.e. their nation for God’s Glory. While this is the appointed task for every true saint it is not easily attained. It is not, however, impossible. It will take commitment, consistency, hard work and patience. Many are not willing to give that much for the Crown rights of Christ. But then again, they may only be ‘Christians’ in name only.

There are two problems facing the nation. The first is the overall political structure, and that the power behind it is stacked against any Godly men rising to a position of influence. Yet this first situation has no intrinsic power of itself, rather it is given its standing and power by the second. The second problem, that which empowers the first, centers on the citizenry. Some of the people who vote for these power hungry mongrels are wickedly immoral themselves. Others are hopelessly covetous seeking government entitlements regardless of whom the government steals from through taxation and plunder. Still others are simply ignorant of the Biblical Law-Standard of right and wrong and thus are easily deceived.

The immediate answer to these problems is not running for political office, but rather setting the stage in order to run for political office. This must be done through a re-education program of the citizenry in the Biblical Law-Principles of government and freedom. If the general population is made aware of the benefits of a good and Godly government only then will they elect good and Godly officials to the seat of power. The acceptance of God’s Law is contingent upon God’s intervening grace to be sure. But when God’s people obey the precepts of the Commission Mandate; God is sure to bless their efforts.

3. A. Some will great researchers. Give them the charge of researching the current issues of the day, choosing those that need to be addressed locally, state-wide or nationally.
B. Others will be able to research God’s Word and the various Christian documents of history to bolster the argument and provide solutions.
C. Others will be able to put it all down in clearly written form. You will need people who can write clearly and have proper grammar. Use someone who has grammatical skills to edit before any publishing.

4. Monitor the politicians when in session or in local meetings. Go to the meetings. Be sure the local Newspaper accurately records what really happened as many papers are bias. Many localities use committees appointed by the magistrates for zoning, building et al. These need to be monitored as well.

6. Don’t be afraid to expose corruption. While most politicians are unethical, in our godless age being unethical is not a crime. It is, however, a sign of potential corruption. If corruption can be substantiated do not be afraid to involve the local FBI. They are God’s ministers for good. Force them to adhere to their calling by prosecuting the evil.

7. Keep governing officials honest by requesting sensitive financial documents using the Freedom of Information Act (FOIA).  If they know someone is checking on their activities, they may fear exposure enough to act blamelessly.