“Eschatology is inseparable from purpose, purpose in history. The goal of the enemy is the Kingdom of Man. The goal of Christ’s people must be the Kingdom of God, ruled by God’s law-word. Eschatology is not only about ends, but also means to the given goal. This is why Theonomy, God’s law and its rule, is inseparable from God’s Kingdom.” ~ R.J. Rushdoony ‘Journal of Christian Reconstruction’, Vol. XV, 1998 p. 11

Eschatology coupled with the application of God’s Law is the lynch-pin for Christian victory. Without a postmillennial view of history, which ensures a comprehensive victory by the Sovereign Christ, the church will languish in fear, doubt and despondency.

The Apostle makes a critical end-time prediction of how it is going to pan out. In speaking of the end of time, he states,

Note: The end will come ONLY after Christ has put down ALL RULE and ALL AUTHORITY and ALL POWER.

He can do this since at His resurrection, all Power was given to Him in heaven AND IN THE EARTH!

The Kingdom of His Dominion had arrived as a result of His resurrection, and at Pentecost the result of that victory came with visible power as the Holy Spirit was poured out.

Jesus had told the apostles that He would not eat or drink with them until He did so a-new in the Kingdom. After His resurrection He does just that; He eats and drinks with them, signifying the fact that His Conquering Kingdom had come and He was seated as King in Heaven reigning over the earth. 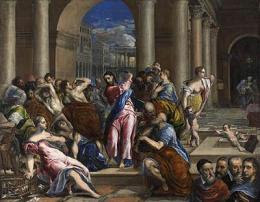 This event was foretold by both David and Daniel:

Psalm 72:8 “He shall have dominion also from sea to sea, and from the river unto the ends of the earth.”

Daniel 7:14 “And there was given Him dominion, and glory, and a kingdom, that all people, nations, and languages, should serve him: his dominion is an everlasting dominion, which shall not pass away, and his kingdom that which shall not be destroyed.”

The New Testament writer to the Hebrews reiterates Christ’s position of absolute Sovereignty and the totality of His victory.

Then he explains why we do not see the kingdom’s manifestation during the dark days of history.

“…But now we see not yet all things put under him.”

The work of Christ’s victory will not always be evident on earth. Nor are we promised that in every age there will be a positive progression of Christ’s Kingdom, especially in light of the Church’s apostasy. What we can expect during ecclesiastic rebellion is God’s chastisement and great darkness. Christ is hidden in those times. (cf Prov 28:12)Nevertheless the Kingdom is advancing. The evidence of that advancement will only be manifested when the church returns to the Law’s application for every area of life.

Here is what we are promised in every time, be it light or dark.

Heb 2:9 “But we see Jesus, who was made a little lower than the angels for the suffering of death, crowned with glory and honour; that he by the grace of God should taste death for every man.”

We are promised that by faith we see the Heavenly reality of eminent victory beyond the senses. By faith we know that victory on earth is at hand. It may not be in our lifetime. But it will come during human life-time. Christ does not need to come again to establish His Kingdom and reign, He already has.

The problem with the modern, postmodern and secularized-Christian church is that they are unwilling to look beyond themselves to the heritage of many future generations beyond their own.

Postmillennial Eschatology is a labor of faith knowing that what Christ has accomplished is real, and what He has promised will come to pass until He subdues all kingdoms. It is at that time that the knowledge of His Universal and Comprehensive Lordship will cover the earth as the waters cover the sea as Isaiah predicted thousands of years ago.