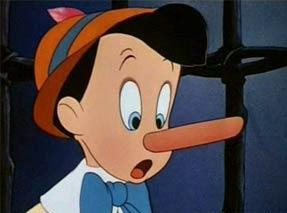 The more lies Pinoccio told the more he became an “ass” (i.e. Donkey). It was true for Disney’s Pinoccio and it remains true today. The more you lie the more you are likened to an asinine dumb animal.
I was told recently by a retired civil magistrate that the only way to get elected is to lie. That statement was astonishing for a number of reasons beyond the obvious.
Obviously, lying is forbidden by the Law of God and it is ultimately rewarded with eternal condemnation.
Revelation 21:8 But the fearful, and unbelieving, and the abominable, and murderers, and whoremongers, and sorcerers, and idolaters, and all liars, shall have their part in the lake which burneth with fire and brimstone: which is the second death.

However, what was even more astounding, beside the obvious, was that this statement was told to me by a church-goer  who knows full well that I stand in God’s Pulpit every Lord’s Day declaring the Law-Word of God! Moreover, by proclaiming His Word, I am declaring the Incarnate Word Who is Himself the TRUTH.
From statements like this a number of things may be deduced.

1. The individual is an idiot. While this is not true of this example, one has to consider why in the world someone of seeming integrity would confess to such an outrageous strategy, especially since elected officials are to be “ministers of God for good”?

2. The individual doesn’t care about people. This is more likely the case. To willfully lie, bold-faced and shamelessly to people just to get elected into public office shows a disdain for the very people the elected official is to serve.

3. The individual lacks a moral conscience. Calculated lying shows that there is a gross lack of ethical substance. The moral compass is broken, and unrestrained pragmatism rules the mind and the spirit.

4. The individual has been in political office too long. All too often a candidate may begin in earnest, but lacking a principled ideology of righteousness falls prey to the habit of telling half truths and lies once he or she is in the office for too long of a time. This is especially true for those politicians that wield power. According to communications and deception expert,  Janine Driver, the greater the power the easier it is to lie without hesitation or infringement on the conscience.

5. The individual thinks that they can orchestrate events by lying.  Lying men want to be like God. They want to control the outcome of events and think that they can do so if they craft stories to fit their agenda. These liars seek to bring about their desired end through deceit.

Jeremiah warns that all liars will eventually be shown for what they are; fools. Even the very best of liars, Jeremiah says will be broken. In fact the Hebrew word signifies that they will be ‘violently broken’ for the many lies they have told. 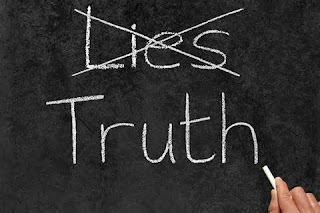