The sin against the first commandment, Thou shalt have no other god’s before the true God, banishes the Name of Jehovah by means of taking to one’s self other gods and their idolatrous names.

The sin against the second commandment obscures and disfigures His Name by making graven images.

The sin against the third commandment, Thou shalt not take the Name of the Lord in vain, abuses the Holy Name of God. 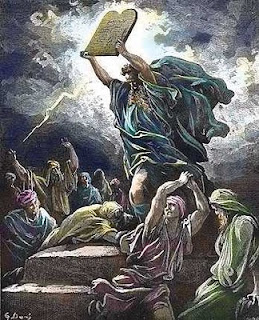 All abuses of God’s Name is a repudiation of His authority, and that repudiation must be met with Holy retribution.

Blasphemy is a terrible sin. But it is also a crime. It is a crime against the Majesty of God and an offense against His Crown Rights. Although American society refuses to view it as a crime it is exactly that nevertheless, and it warrants criminal sanctions according to the Scriptures.

Blasphemy, of any kind, against the Throne of Heaven, is forbidden. Whether it is a blasphemous cursing or a blasphemous action it is both a sin, and a crime.

Blasphemy is a rebellious act. It is an open declaration of war against God. It challenges and incites God to action.

Whenever a society tolerates such acts of lawlessness against the True God, God is forced to bring His wrath upon a culture, especially the civil magistrates who failed to uphold and protect God’s honor.

All acts of Blasphemy are viewed as revolution against God’s legitimate authority.

Historically, all acts of blasphemy were dealt with by the church as well as the civil magistrate, even to the extent of blasphemy against God’s Holy Day. Consider the Connecticut Law of 1656 concerning the Lord’s Day.

Connecticut Law, 1656
“Whosoever shall profane the Lord’s day, or any part of it, either by sinful servile work, or by unlawful sport, recreation, or otherwise, whether willfully or in a careless neglect, shall be duly punished by fine, imprisonment, or corporally, according to the nature, and measure of the sin, and offence.

But if the court upon examination, by clear and satisfying evidence finds that the sin was proudly, presumptuously, an with a high hand committed against the known command and authority of the blessed God, such a person therein despising and reproaching the Lord, shall be put to death that all others may fear and shun such provoking rebellious courses.”

While many may think this law too harsh, it shows the severity of Blasphemy and Sabbath breaking. The observance of God’s Laws kept the social order, suppressed immorality, kept the family intact, the economy healthy, and God’s Blessings were upon the nation. We stand upon the blessings of God as a result of the fidelity of those Americans that have gone before us.

Today however, while mainline Christianity tolerates society’s open blasphemy against Her Lord, the Muslim, humanists, and outright pagans remain devoted and intolerant against any blasphemy against their gods, who is in fact, not God.

GOAL: Get the Christian church, its pastors and leaders, and the local civil rulers to re-consider their devotion to the Honor of God by no longer tolerating open rebellion and blasphemy against His holy and legitimate authority. .

STRATEGY: Educate the community. Pressure them to pressure the local authorities. Educate the Magistrate. Challenge them by showing how other religions are jealous of their gods – why are not we as passionate? Stir the people. Warn the magistrate. Explain to them that God’s blessing will be upon them for their obedience. Also mention that the curse of God rests upon them for rebellion. Do it tactfully – but do it sternly.